“Lipstick Latin” appears to be the most viewed post on my blog. So I guess it's time for another dip into taxonomy and botanical Latin.

As explained in that prior entry, my adventures in Latin were based on academic insecurity and intellectual romanticism: I believed that smart, credentialed people knew Latin. Therefore, a light application of Catullus or Livy might make me at least appear fit for Academia.  In addition, since I had rather pronounced stage-fright when it came to speaking a foreign language in a classroom, Classical Latin, not truly “spoken” for about twelve or thirteen hundred years, seemed ideal: reading and translating, not conversing. Neither Caesar nor Ovid required one to say “Where is the bus station?” or “Those yellow shoes are too expensive.” Perfect! However there was one teacher in the Classics Department who insisted that Latin, while linguistically static, was alive in the hills and in her classroom. And one day when our much more traditional professor was off at a conference, she appeared. Poor woman; she greeted us in Latin, and we just sat there. She asked us questions (in Latin) and we just stared at her. She even tried to get us to sing with her (in, God help us, Latin) and we sat, stared, and rolled our eyes. After about 15 minutes of this, she gave up the fight and returned to Caesar's wars.

So, no conversation, no worries about correct pronunciation—no one really knows how it sounded since no one speaks (or sings) it any more. Admittedly, there are some straight-forward rules from Classical Latin, but they are not always followed. So when attempting to speak the scientific names of plants, William T. Stearn, eminent botanist and author of, wait for it, Botanical Latin, maintained that “How they are pronounced really matters little provided they sound pleasant and are understandable by all concerned.” Hi Five, my man!

But why Latin for plants? So-called “Common Names” are easier to remember (and say). And they're so much more colorful.  I mean, who wouldn't rather ask for “Pussytoes” than Antennaria neglecta?

Now I could get all academic on you and be thorough and very, very long. But this is a blog, and I'm not a taxonomist (though I do like the word).

Although common names might seem, well, friendlier, they're not always reliable. For example, if I refer to the lily I'm growing outside my kitchen window, you might get a kind of generalized mental picture, but you are also likely to be wrong. There are over FIFTY genera (plural of “genus”) of plants whose common name contains the word “lily.”
Then there are rather inexact variations on established common names using the modifier “False” like False Lily-of-the-Valley, False Solomon's Seal, False Spirea, False Hellebore, etc. Sort of like identifying someone as “Not Murray.”

So ask me again: why Latin for plants? Short answer: one dead (i.e. unchanging) language + one name = we all know which plant we're talking about.

Thanks to Carl Linnaeus (1707-1778), scientific plant names are Latin or Latinized and binomial (consisting of two parts). The first part indicates the genus and the second is the specific epithet or species epithet. Together they form the species name. In written form, they are both italicized, but only the genus begins with a capital letter. When using the genus without a species epithet, the genus can be followed with unitalicized sp. or ssp. for single or multiple unnamed species.

The names themselves can be useful, but not consistently.
Some indicate physical characteristics: alba=white, sanguineum=blood-red, hirsuta=hairy, campanula=small bell (referring to the flower shape),  foetida=having a bad smell.  But there are other name-sources.

Latinized names of people, real or fictional: Abelia spp. for Dr. Clarke Abel, (1780-1826) British naturalist; Forsythia spp. for William Forsyth, (1737-1804) Scottish horticulturist; Hyacinthus from Greek mythology: the youth loved by Apollo. In one version, the West Wind god, Zephyrus, caused his death out of jealousy, and Apollo created the flower from his spilled blood.

But then there are names like Hypericum which is thought to be derived from the Greek hyper for "above" or "over" and eikon for "image" or "apparition." It may have been used to ward off evil spirits or possibly hung above pictures or religious icons for protection. Though not too helpful in terms of matching Latin name to physical plant, it is interesting from a medicinal point of view. For centuries, Hypericum perforatum (St. John's Wort)   has been used to treat a variety of ills. Currently it is prescribed widely in Europe to treat depression, an evil spirit if there ever was one.

Learning the scientific names of plants is enormously useful as well as occasionally entertaining.  And it's a whole lot more fun than translating sections of Caesar's Commentaries.  But I admit I still get a kick out of asking for "pussytoes." 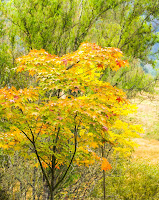 I love it. I love the first touch of fall because it means my summer suffering is almost over.  I know it sounds odd, ungrateful, or just plain stupid coming from someone living under sheets of wet and grey for several months out of the year, but summer gets old fast. Unblinking, it insists we look it squarely in the face and rejoice.  Yeah, well, not what I moved up North for.  I'm grateful on behalf of my tomatoes.  That's about it. Too flat. The light is too flat. Shadows too sharp. Summer presses down on the brain, squishing thought, expelling romance.  A big, dumb grin of peonies and ox-eye daisies.

OK, maybe summer isn't THAT bad.   Tactless, promiscuous.  But throws a good party.  And many flowers that are said to bloom in fall, actually begin in late summer. Anemones come for the party in July, but stay late for the long talks in September.  I swear they look different this time of year, more intelligent, less perky.  Even a little pensive.  Bonjour Tristesse?

I originally planted a Blue Mist (or Blue Beard) shrub for fall flowers.  But when it first bloomed, I kept saying, "That's it?  That's all there is?  Just little patches of blue bumps along a stem?"  But softer light, nerves steeled against the constant blanket of bees, and a macro lens bring out the turquoise anthers waving above those purple petals and the blue-green leaves.  An animated boutonniere.

Even the unfortunately named "Leadwort" takes on a bit of glamour in the long, autumn light.  Like the peach-colored light bulbs used at the Moulin Rouge because they improve the look of women's skin (or so I've heard), flowers opening against a background of browns, reds and oranges have a kind of glow. 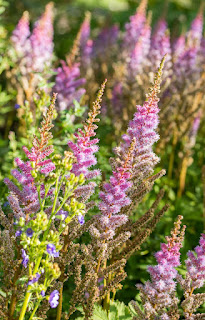 The beginning of fall brings the last days of Chinese Astilbes.  Thanks to a friend who gave me two or three, I went from having the equivalent of a decorative throw-rug to wall-to-wall carpeting.  But it's now that I appreciate them most, when only a few resist brown for a moment more.  Improbable details of color I couldn't see in the summer glare.

But fall hasn't taken taken off her coat just yet.  It's only the dawn of October; the woods still wait. 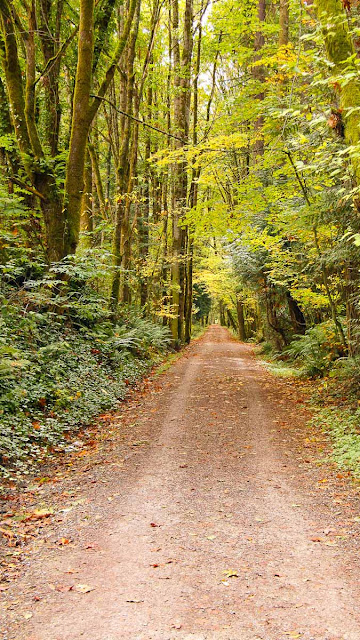 Posted by Emily Schiller at 1:53 PM No comments: