An Eccentricity of Color: Blue Flowers

When I was a child, Red was synonymous with Flower: hibiscus, bougainvillea, and roses. Maybe there was one pink hibiscus growing somewhere, a shy afterthought in a garden that had never been thought out. And the thoughtless, scarlet Oleanders. The PTA sent us home with cautionary tales of poisonings and urgent requests to uproot the notorious vegetation. That we were harboring a killer in our yard was kind of thrilling to an eight-year-old but horrifying to my parents. So flowers were red and flowers could be dangerous. 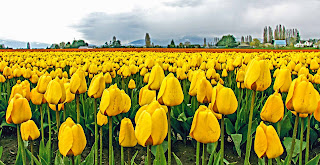 But not yellow ones. I try to like yellow flowers. I really do. There's just so many of them.
And they're so, well, “sunny.”
Years ago, when I was a dancer in a college theater department, we had the “opportunity” to work with a “movement therapist.” Yes, yes, the quotation marks are swarming. How else to indicate to the reader a raised eyebrow, a wrinkled nose, or a brief curl of the lip? Anyway, “a very nice lady” (curl of the stomach) appeared in a tie-dyed leotard and tights (and scarves, there MUST have been scarves). She lowered the lights, gave us some breathing exercises, told us to “feel” ourselves becoming a flower, and then to move around the room expressing said flower. . . . Can I tell you how much I did not want to feel myself to be any flower whatsoever much less MOVE like one? It was the very early 70s and I wore all black and thick black eyeliner. Basically, I was Goth in a psychedelic world.
Anyway, every person in that room began to sway and then to skip and then to twirl, murmuring “I'm a daisy” (I kid you not), “I'm a buttercup,” “I'm a marigold” (his mother must have gardened). Red clearly was too dangerous, too sexy and purple too royal, too bold, because every last one of them chose to be a cheerful smudge of yellow. I wish I could tell you that I became a Scotch Thistle or some sort of fungus. But I was too dark a soul for irony and too shy for outright rebellion. So I left.

Eventually I gardened, growing red, purple, green, white, and, yes, even yellow flowers. But the blue ones are different. An achievement. A gift. A discovery every single time.  I don't know why. It's not like there aren't loads of blue flowers that grow easily. So why do they feel so uncommon?  An eccentric color for a flower.  Skies are blue; water is blue; flowers are red or yellow or some variation.  Blue flowers take some thought.  Unnatural by their very nature.  And just a little bit odd.

Borage.  What a tedious name for an herb.  It sounds like a purgative or good-for-you-but-nasty fiber.  But who cares what it's for or what it's called when the flower glows from either side. 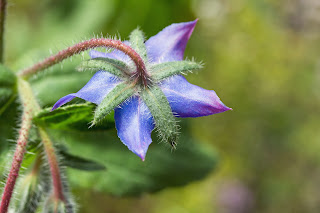 A neighbor tried to give me a weedy-looking plant he swore was chicory.  I didn't need any more invasives and it was ugly anyway.  I stuck the pot in a corner and ignored it.  I didn't water it, didn't feed it, didn't remove the (other) weeds growing over, around and in the same pot with it.  Until this happened:
A celebration of a flower.  A chorus of anthers.

Love-in-a-Mist, an annual that reseeds with a promiscuous abandon is found in any collection of flower photographs.

But after taking more and more time with it, shooting more slowly, and then processing more deliberately, it began to take on the density of an oil painting.

Last is a flower I've not yet grown.  I have the seeds, and gardeners far more knowledgeable than I have given me detailed instructions but also have cautioned me to lower my expectations.  Blue Poppies.  They are tricky to grow, but might be bliss to dance.

Posted by Emily Schiller at 8:32 AM