Getting To Know the Natives
(Part Two)

Returning to the project of photographing all the native plants on our guided walk through Stimpson Family Nature Reserve in leaf, flower, and fruit. Did I mention that most of Stimpson is in a forest? So it's kind of dark.  And often breezy. And using a flash feels like cheating (and looks like it too).  And hunkering down with your tripod, hoping for a moment where you can get a fast enough shot to get SOMETHING in focus, but at a low enough ISO to prevent image noise as other hikers have to creep around you, week after week after week might seem tedious.  Frustrating.  Boring?  Actually, weirdly, it wasn't.  It became a passion as well as a project.  Clearly, to get all the images we needed, we would have to look beyond our three-mile, three month project.  So we found ourselves becoming plant-hunters. 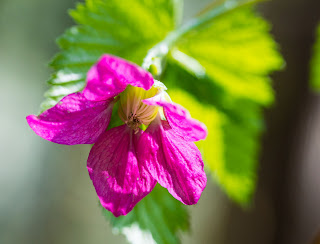 Birds really do get up earlier than we do, so finding a plant that hadn't been picked clean of fruit was often a challenge.  When you point out something called Salmonberry 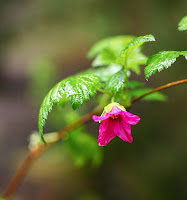 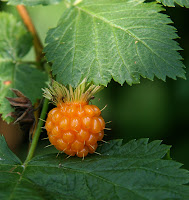 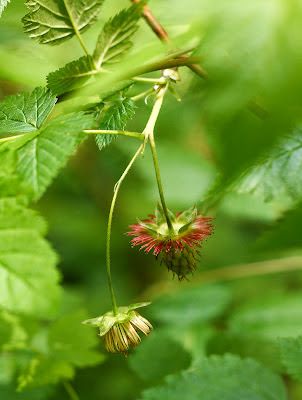 (Rubus parviflorus) to people who have signed up for a native plant walk, they'd at least like to see a picture of the berries actually growing.  We scoured every local trail until we found a single, under-ripe berry and a couple of others just beginning to form.
On a walk around Lake Padden--another local park--we ran into a huge Red Elderberry (Sambucus racemosa) covered in fruit.  Of course the people sunbathing nearby thought we were nuts as we ran gleefully around a bush snapping photos when there was a gorgeous lake right behind us. Then there was the time we went to an open house at Pilchuck Glass School—founded by Dale Chihuly—and spotted some False Lily-of-the-Valley (Maianthemum dilatatum)  fruiting! The dark forest was the culprit this time. We'd never seen our little patch flower, much less produce berries. We jumped off the walkway to get closer and took more shots of the marble-like berries than of the glass art. 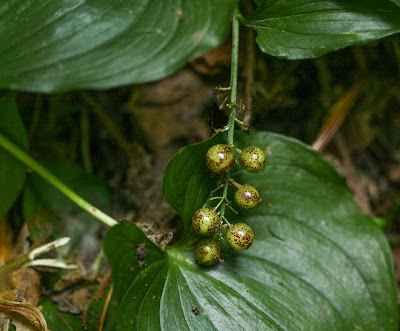 And then there was Rattlesnake Plantain (Goodyera oblongifolia) whose flower stalk mocked us for two months!   But we'd only seen it look this promising back at Stimpson. 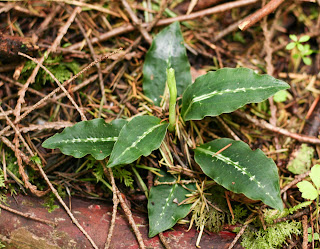 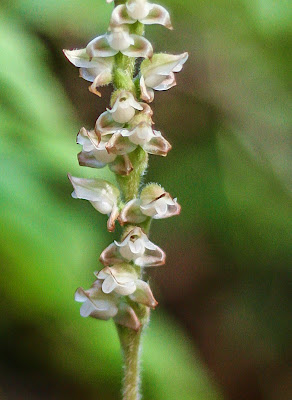 We ran out to the park every couple of days, checking several likely specimens that appeared just on the verge of blooming until FINALLY one did! But not where we'd been looking.  Off the trail, on a slippery hillside was a single orchid (yes, they are orchids) whose tiny, tiny flowers had louvered open.  Stomach on the ground, bracing a cheap tripod with one shoulder and myself with my toes, I got the shot. It may not be “Adventure Photography,” but plant-tracking has its rewards.

Posted by Emily Schiller at 8:05 PM