Getting To Know the Natives
(Part One)

For our Whatcom County Master Gardener project, David and I chose to give native plant walks at a relatively new park: The Stimpson Family Nature Reserve. We wanted to take groups of people on easy hikes where we would help them learn to identify local native plants. Nice idea except for the fact that we had just moved here from Los Angeles and couldn't tell one fern from another (and frankly, I wasn't exactly all that certain what “deciduous” meant).

Luckily, there were lots of opportunities to learn. We went on plant ID walks with some experts (one lovely MG went with us in late April when it snowed while we bent over tiny specimens trying to shield our open books) and took photos (lots and lots of photos). We eventually compiled a list of 60 native plants that could be identified (that WE could identify) on our walk.

Which brings me to the next problem:  identifying what isn't there. Neat trick. Basically, it is sometimes difficult to identify a plant that isn't flowering; and plants flower, fruit, or even appear at all at different times of the year.  How much fun is it to go on a native plant walk and be told that the bunch of green leaves on your left will turn out to be either Fringecup (Tellima grandiflora) or Piggy-Back (Tolmiea menziesii), but we won't know for sure until it blooms?

How enthusiastic would you feel about looking at 3 oddly-shaped leaves and hearing that the Trillium--(Trillium ovatum)--is one of the most beloved, early flowers here in the Northwest, but you're too late to see it? 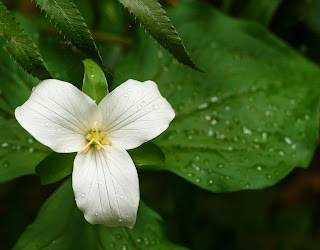 And how much would you really enjoy stopping at a bog and being told that sometime in late summer the stunning Mexican Hedge Nettle (Stachys mexicana) will emerge. Trust us.

I'm all for using your imagination, but this seemed like too much too ask for a two-hour walk.

Some other MG friends who also gave plant walks solved this problem by carrying a flip-book of photos of the flowers in bloom. Genius! So we set about photographing our plants in leaf, in flower, and in fruit. Perfect!  But also a new set of problems.

More about that next time.

Posted by Emily Schiller at 4:26 PM